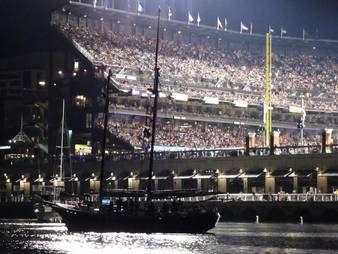 Anchored at McCovey Cove 5/2014
What was your first sailing experience like?
Ha! Yeah... My first sailing experience was a bit of a hot mess. I’d found a meetup group, offering an "intro sail" on the water. One of their students was captaining for the evening, while an instructor on board looked on. In the hour or two on the water, we managed to cut in front of one of those barges you see navigating the estuary–receiving some heated advice from the barge’s pilot. They move fast by the way. Later in the sail, the instructor was hit by the boom, not exactly hard, but still.
​By the end of the night I didn’t know much, but I knew I wanted to investigate a few more sailing schools.

What does sailing mean for you and your family?
Adventure. For the family and friends, I see it as a way to have adventures together. I just helped a friend and his family sail down to Cabo San Lucas, that was awesome. But even a day racing as part of a crew or a raft up in McCovey Cove during a ball game is an adventure. I have the romantic idea of taking a long weekend or a week with a boat in the bay, maybe explore the delta or watch the whale migration from anchor in Drake’s bay.

For me personally I am also oddly compelled by the history of it. To know that the knot tying skills I learn are the same ones used for centuries. Can’t say that I know why I like this aspect of it, maybe there’s a nostalgia to it. There is certainly something to be said for an aspect of life that isn’t constantly changing from year to year. Unlike, say, the tech industry.

Speaking of which can you tell us a bit about your technology background?
My background has been in graphic design. I started in the TV industry. You ever watch the news? I started out making those little graphic's that pop up next to the news anchor’s head. Good stuff. I started writing small bits of script for an animation program. My first website was for the TV station’s artists and engineers. Glamourous stuff, like detailed steps for rebooting hard drives, mainly to avoid late night phone calls when some piece of equipment broke. Which happened. A lot. It was a chance for me to start developing a skill I didn’t quite yet grasp.

​Then I started freelancing. I really got into learning code—HTML, CSS, Javascript, and even some arduino/C+ mixed with circuit boards which is quite fun. Some people say it’s like learning a new language, but it’s also a different way of thinking about things. Solving riddles. 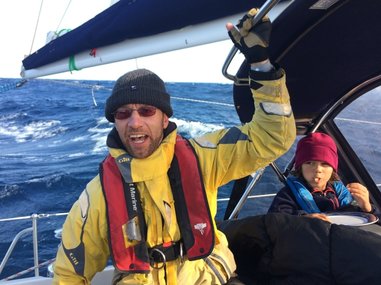 ACSC's Webmaster Eric Gross, enroute to Cabo MX. No doubt saying something incredibly insightful and inspiring.
How did you come to learn about ACSC?
The old fashioned way. I was clubbed over the head and woke up on a boat… Well maybe not exactly... A client discovered I liked to sail and invited me to race one night on her friend’s boat. It turned out we raced at that same spot, where I used to watch the spinnakers from my office window. I doubt he remembers it much, but the boat was club President, Kame Richard’s Golden Moon. I think I worked the pit. Soon after that there was a big get together at the ACSC yard to roll out massive amounts of blue carpeting that had been donated. A couple of chats with volunteers, about how to repair gelcoat and I was pretty hooked.

What do you value about ACSC?
I really appreciate that there is a place for kids to learn sailing. I really wish I had learned how to sail at a younger age. The atmosphere is pretty cool too. Not the hoity toity-ness of a yacht club. Feels more like a group of inventors or something.

What was your intent with the new ACSC website?
So many things really. I want to convey that sense of excitement and joy that you get from sailing and learning new things. You know that moment when it just clicks? The sail shapes up with the wind, the boat heels and off you go. So that was a big part of it.
To capture that excitement, I showcase big photos, big type, and big smiles. The front page is designed to update dramatically as the club prepares for different events. And the technical stuff is wicked simple, so even new volunteers with just a few minutes to spare can make updates. That’s the idea at least, we will see how it plays out.

What type of sailing do you most enjoy?
A couple of summers back I was blessed to find myself racing aboard an X-Yacht 40. The captain, Gael, was a mix of skilled racer, storied sailor, and humour filled Québécois (don’t call him Canadian). We’d usually have a crew of eight or nine and be you a newbie, or old salt you felt right at home. We were pretty dialed in to the boat and meshed very well together. Plus it’s just good, salty exercise.

Why is that sailing type compelling for you?
Definitely the camaraderie. Among the crew of course, but also being among other sailors. Especially for trips out the gate up to Drake’s Bay or down to Monterey. It’s like a vacation with a few hundred friends.

​What do you see as your future in the sport?
Is cruising a sport? I’d love for that to be my future. My immediate future is the sport of upgrading the wiring for my 1979 Catalina 27. Yeah buddy, I know how to have a fun time. Oh and if anyone is looking for a navigator or crew for the next baja-ha-ha, I can make myself available for that too.